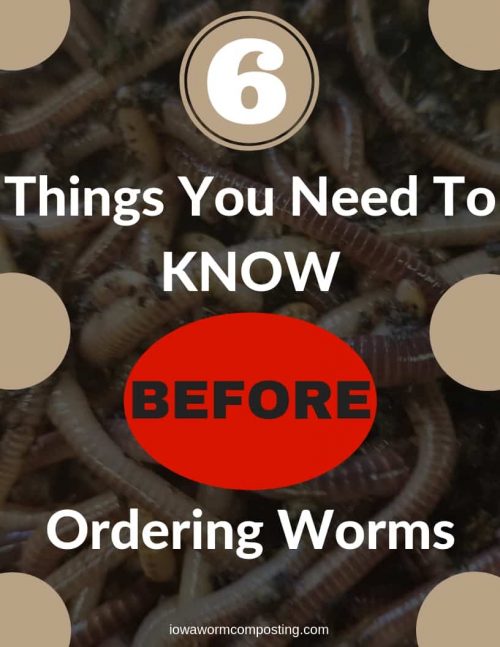 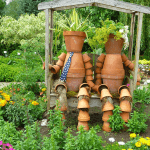 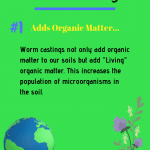 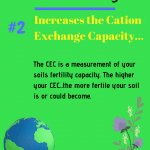 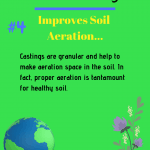 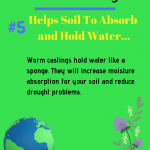 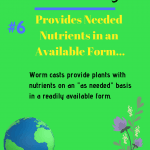 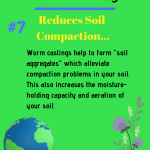 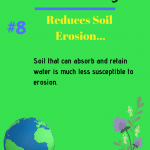 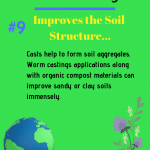 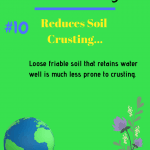 Healthy soils are vital for sustainable farming or gardening. One reason no-till and permaculture practices are important is that disturbing the soil breaks up the fungal hyphae and mycelium which are so crucial.

This article is going to dive deep into the top 10 benefits of worm castings. We will also talk about these benefits and explain the reasons “Why” they are important.

So, saddle up for a crazy ride into the wild world of worm castings and healthy soils. 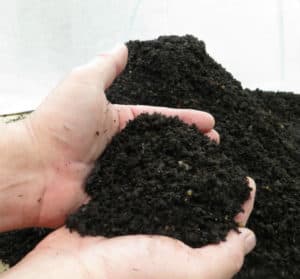 What Are Worm Castings?

Worm castings are worm poop. Simple? Not really. In fact, not simple at all. Worm castings are very complicated and not completely understood even by scientists. However, the castings research is ongoing and our knowledge base increases every year.

One FACT about worm castings; there is no such thing as 100% worm castings. There will always be some amount of unprocessed organic material in a pile of worm casts. It is unavoidable and hard to measure.

So, the next time you see a claim of 100% worm castings, you should run the other way. No kidding! I will talk more about this later on.

The Definition of Worm Castings

Here is the proper definition: “Worm castings are stabilized organic matter that is produced by the interaction of worms and microorganisms under controlled conditions.”

This definition was provided by Dr. Norman Aroncon Ph.D. of the University of Hawaii-Hilo in a presentation.

Dr. Aroncon is a frequent presenter at the annual Vermiculture Conference in Raleigh, North Carolina.

He knows what he is talking about. Dr. Aroncon is also one of the world’s foremost academic researchers of worm castings and worm castings tea.

The worm castings definition is a long sentence with many terms. Let’s break this down a little to gain a better understanding of the meaning.

What is Stabilized Organic Matter?

Organic matter that has biodegraded from complex molecular structures to simple compounds and then into individual elements is said to be completely biodegraded.

Somewhere in the process between simple compounds and the disorganization into individual elements, the organic material becomes resistant or ‘stabilized’.

Clear as mud…I know. Let’s take a look at a couple of examples that are pertinent to our discussion.

Nature can take many years to compost or biodegrade organic matter. The process of thermophilic composting can speed this process up to a matter of days or weeks. This is your outdoor compost pile in simplistic terms.

You add nitrogen (greens, food scraps, manure, etc.), carbon materials (brown leaves, straw, dried grass, etc.), layer it in and add moisture. The microorganisms will feed on the organic matter and start breaking it down.

This microorganism activity creates great heat(up to 160 degrees F.). The heat will start to subside when the aerobic bacteria start to run out of oxygen.

This is when you turn your pile to introduce more oxygen. The heating process begins again. The bacteria need moisture, oxygen, and a food source to thrive.

When turning no longer produces heat with adequate moisture and oxygen, the thermophilic microorganisms have mostly died-off and the mesophilic bacteria (70-100 F.) take over the decomposition process. Your compost is becoming more stable.

The thermophilic heating actually accomplishes many good things. It kills many pathogens and weed seeds.

When your compost becomes crumbly, you can now add it to your soil in the form of stabilized organic matter that has limited amounts of bioactivity. This is a little simplistic but mostly accurate.

Worm composting takes place in the mesophilic range (70-90 F.) The worm bedding is a combination of different carbon materials.

Mesophilic composting can take a long time in nature but the composting worms speed this process up considerably. The worms are actually eating the mesophilic bacteria (aerobic and anaerobic) but slurp up the decomposing food source and bedding in the process.

You end up with stabilized organic matter that is strife with a diverse population of microorganisms.

Interaction of Worms and Microorganisms

The second italicized portion of the “worm castings definition” is also important to our discussion. The interaction of worms and microorganisms is tantamount to understanding worm castings.

Earthworms derive their nutrition from the various microorganisms that are consumed. However, as the food passes through a worm’s digestive system,  earthworms add their own microorganisms in the process.

The result is worm castings have a higher population of microorganisms than the food that was consumed.

Worm castings producers control the conditions in their worm’s habitat to make the worm composting process work. There is a myriad of options that are employed for various reasons.

Some examples: Bedding temperatures, moisture levels, type of composting worms, types of bedding materials, different food sources, and length of time before castings harvest all have an impact on the quality of castings (or lack thereof).

By far, these “controlled conditions” have the largest impact on the overall quality of the worm castings.

Did you know that you can create fungally-dominated worm castings by using certain bedding materials?

Did you know that you can make bacterially-dominated castings also?

Some worm castings producers are making “designer worm castings” for their customers. Certain crops are known to grow better with different types of castings. This is leading-edge science but will become the norm as more plant-specific research is done.

This all results from controlling the conditions that the earthworms are raised in.

The benefits of worm castings reach far beyond helping our plants grow. Some understanding of soil science is necessary.

Let me describe what healthy soil is and why it is so important.

Firstly, one teaspoon of healthy soil will contain BILLIONS of microorganisms.

Secondly, healthy soils will have adequate nutrient levels but not excessive. 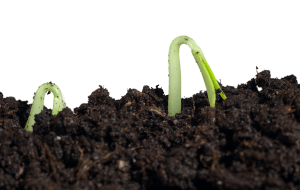 Why is Healthy Soil Important?

Have you heard of any of these terms? There is not one of those terms that apply to healthy soil but welcome to modern agricultural practices. Maybe it is time for a change?

To understand the importance of Healthy soil, let’s examine what Un-healthy soils bring to the table.

Well, to start…the entire list of terms above. Here are a few more BIG ones. Food Insecurity, poverty, climate change, and unsustainable development.

Unhealthy soil is a major contributor to climate change. Poor soil releases carbon which turns into carbon dioxide. This exacerbates the problem.

There is overwhelming evidence to support the need for healthy soil. So, let’s talk about the benefits of worm castings and how they can help. 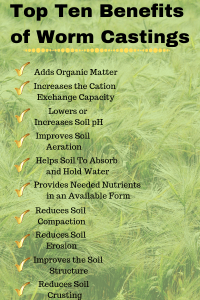 No discussion of the benefits of worm castings is complete without addressing the NPK designation.

Here is the problem. If I want to sell my worm castings as a fertilizer (which they are), my state regulators require me to have an NPK designation on my label. Most worm castings will test 1-0-0 on an NPK test.

Chemical fertilizers are not in a plant-available form. They need to be converted and much is lost in the process. That is why there is always so much excess with chemical fertilizers. They also do not provide many things that healthy plants need to grow. (plant hormones, humic acids, etc.)

However, worm castings work completely differently than chemical fertilizers. They are not even in the same class.

It is an apples and oranges comparison and complete ignorance on the part of the fertilizer regulators. (maybe)

Think of worm castings as an NPK producer. You add worm castings to your soil and the lifecycle of the microorganisms produce nitrogen, phosphorous, and potassium for your plants.

They also produce plant hormones, humic acids, and other things. But, they produce this in a plant-available form, so your plant does not require that much. It is a two-way symbiotic relationship with your plants and the soil.

A better test for worm castings is a biological lab report for bacteria, fungi, amoebas, humic acids, plant growth hormones and the like

Most reputable worm castings producers have batches of their castings tested and can provide the results on demand.

This lab test result is probably not important if you are a gardener. However, if you are a grower of a certain crop (ie.tomatoes, cannabis, etc.) and know certain types of worm castings work well for you, it is vital information.

My suggestion is to work with a worm castings producer and ask for the lab test results.

This information can not be on the label or attached in many states. Why?

Well, Big Ag is worth Billions and worm castings producers are not. You decide. 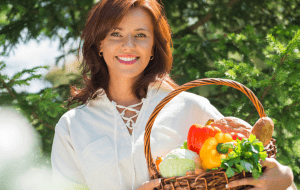 There has been much research done on the most efficient use of worm castings. The results tend to be plant-specific because that is the way research is done.

If you are a commercial grower, you will probably have to do your own testing for optimum results.

Here are some rules of thumb though:

Potting Mixes:  Add 20% worm castings by volume. Example: 1-gallon of worm castings to 4 gallons of potting mix. Do NOT use a potting mix that has chemical fertilizers in it. Read the label…it will say.

Transplants in the garden: 1/2 cup in the bottom of the planting hole for smaller plants. 1 cup for larger plants. ie. tomatoes, green peppers, summer squash, and the like.

Seeds in a row: We like to make a little deeper row and put about a half-inch of castings in the bottom. Plant your seeds and cover with dirt. Sweet corn would require a little more but most row vegetables will be fine with a half-inch.

Seed Starting: We find that worm castings are not really required for seed starting. However, soaking your seeds before planting in a weak dilution of worm castings tea, promotes better germination rates and plant health.

Compost Tea: Compost tea can be made with worm castings to give some quick energy to growing plants. The addition of tea can also add increased microbial biomass to your soil.

You can always side-dress your plants with worm castings at any time. Just remember, the microorganisms will die if exposed to UV rays (Sun), so be sure to cover the castings with an inch or so of soil.

Can you grow your plants in pure worm castings? NO! Researchers tried this and always had bad results…on everything.

This baffled them for years until the testing methods became better. They found that plant growth and health exhibited a Bell Curve.

It would get better(with more castings), level off, and then decline. They were mystified.

They finally discovered that excess plant-growth hormones were the culprit. Too many worm castings would accelerate the growth to a pace that the plant could not recover from. It would eventually succumb and die. Many herbicides work on this same principle.

The Disadvantages of Worm Castings

I have expounded the virtues of worm castings for about 2000 words. What about the other side of the coin? Nothing is perfect. Worm castings are no different.

There is absolutely no downside to growing with worm castings. I would put worm castings up against any fertilizer (chemical or organic) for plant health and yield. They also improve your soil health immensely.

Healthy soil was discussed and how important this has become to everybody.

The top ten benefits of worm castings were also presented.

Worm castings usage was covered and some handy rules of thumb were explained.

Finally, we talked about some of the disadvantages associated with worm castings.

I covered a lot of material in this article. There are a lot of links (internal and external). If you would like more information on a particular topic, please click through the links to learn more.

As always, feel free to comment or ask questions. We love to hear from our readers!